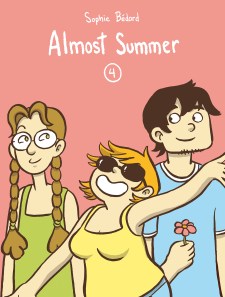 The fourth and final volume of the Almost Summer series will be available in bookstores on September 13th and Pow Pow Press will be celebrating its release with a book launch in Toronto! Join us at The Beguiling on September 22nd for an evening with the Pow Pow crew. Sophie Bédard will be there, alongside Michel Hellman (Nunavik), Cathon (Vampire Cousins) and publisher Luc Bossé. On September 23rd, we’ll also be in Toronto for Word On The Street – the city’s annual celebration of literacy and Canadian writing.

Almost Summer strikes a perfect balance between drama and comedy, chronicling the daily life of a group of teenagers. In this final chapter, Anthony is looking for an apartment while Michelle is looking for a prom dress. Matthew is trying to make sense of his own feelings while Emily is trying to assert herself. High school is almost over. But you know what they say : it’s not over till it’s over. And even then, it’s not really the end.

We’ll also be debuting Almost Summer 4 at Small Press Expo in Bethesda, Maryland. SPX 2018 is happening on the 15th and 16th of September – and we’ve been told it’s great, so we can’t wait to meet you there!